“One year ago today I took an oath to serve as your Sheriff. At the time I made a commitment to do everything within my power to build a safer, cleaner, and healthier community,” Sheriff Balaam said. “A great deal of hard work has gone into getting us where we are today and where we want to go in the coming years. I sincerely appreciate the men and women of this office, our partner agencies, and the public for their partnership in helping to provide the highest quality public safety services possible.”

Highlights of the 2019 State of the Sheriff’s Office include:

“It is truly an honor to serve as Sheriff and I’m very proud of what we have been able to achieve for the benefit of this community,” Sheriff Balaam said. “Looking to the year ahead, I plan to continue and increase these efforts. Already, the office has plans to open a unit within our detention facility specifically to address the needs of our nation’s veterans who have become incarcerated.

“My office is also partnering with other local law enforcement agencies to regionalize resources that focus on reducing dangerous criminal activity such as violent crime, gangs, and human and sex trafficking.

“I am incredibly honored to serve as Sheriff of this great county, but I would not be able to do any of it without the men and women of the Sheriff’s office and the support of our community,” Sheriff Balaam added. “As we continue to move forward and set the tone for the next decade, the Washoe County Sheriff’s Office will keep the focus on taking violent offenders and predators off our streets and maintaining the safety and security of our community.” 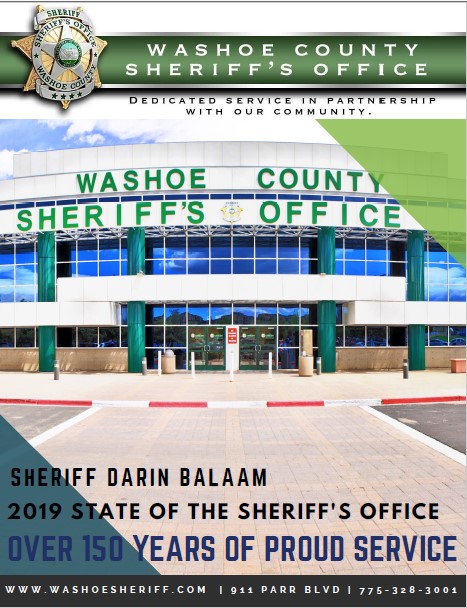